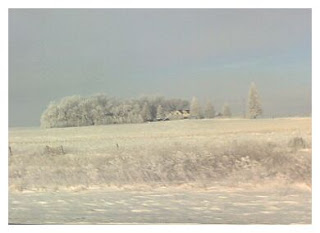 We stepped out of her enormous forehead onto snow barreling in from Canada. Our boots cracked wafers of Nordic whiteness sixty-seven miles out of Minneapolis. Vikki, a communal affair in life, connected thought waves in death, remained an undigested piece of frostbite. Stinging winds told of unrequited fortunes and the desire for closure. None of us could move on completely without resolution. None of us could continue with her ever present memory nagging. The conundrum had a long shelf life. The truck door shut. Silence returned to the tundra.

Brad sat on a tree stump. His frozen eyelashes filled with icy mascara. The rest of us stood in a circle, undaunted by the journey, intent on our conviction that if we could forfeit our notions of what happened, we would be well again. Four hawks circled the tree tops. The sun softened the landscape. Echoes from other worlds held us in a trance.

Morning mist traveled from our mouths like drunken Polar bears.

That silence again. It scorched us.

We never thought the problem was anything but her own. Vikki was a force of nature jumping between celestial effervescence and hellish unattainability. She was the kind of woman who traveled between the left and right hemisphere without warning, remaining unreachable in her perch above the corpus collasum. Her beauty famous, her fierceness even more so. No sins were forgiven. No trespasses forgotten. She hated the way her looks lead men to her without regard for themselves or others. She hated the constant requests for her body at the denigration of her mind and person. Sometimes, those who were refused, took anyway. Largely, Vikki hated the time wasted on such trivial occasions. She disliked that she succumbed to it all. She disliked that she could not shut it off; find funding for a good university and forget about carnal knowledge and the need for justice. She wished she was smarter, had academic connections, knew how to navigate the world better. All she seemed to know, though, was how to wrap you around her body in eternal longing. A magic trick none of us could divest of its impact.

When we first met her, she was a face from blue-collar lineage with mesmerizing powers. That was all. A miniscule speck of humanity wedged in back woods glassiness waiting to be dislodged. In Vikki’s way of thinking, what happened was humiliating; to our minds, she made us pay for the hole it burned in her aspirations. Although the consensus varied, she was never far from our minds. Buried and ready to be resurrected at a moment’s notice, at the slightest glimmer of the past.

We held fast in front of Brad’s purple Jeep Renegade. A small avalanche of icicles fell from a branch. The hovering mist gathered momentarily to suggest a gangly figure. We did not have an explanation for the poltergeist emerging before us. The image pressed itself against us with the swiftness of a three-card Monty dealer.

Her frosty outline left an ice pick in our backs. Purposefulness filled the loitering air. Brad got to his feet. Stared hard. Looked at us, then back at the tree line. He wobbled like a shack on fire about to decay into a heap of spent wood. Facing the row of pines did not dissipate our incredulity. Nothing but the wind whispering and a figure appearing. I suppose people used to gather in the mist and stare at things, wondering what went wrong with their lives, looking for an answer. It’s not like you can stand and ponder on a busy street corner, listening the horns honking and people chattering away on their phones. Back when people gathered in the fields or plains there was something miraculous to their missteps, or events as they unfolded in the expanse of nature. Tough times called for extreme exterior summonses.

Perhaps it is the violence of an event that gives it precision when recounted. Those were harsh days. Our Vikki, she knew such harshness. Repeated violence and difficult obstacles. We did not. Not much anyway. It is the violence that held her to us, that kept us thinking, in between the lines of guiltlessness, that maybe it could have been prevented, that she could have had a better end and not been penalized by her physical presence.

“Hey, you going to stay or continue the powwow?

A large person in tall boots stomped up the hill without notice. We opened our mouths to speak but all that came out was more mist. He stared a while longer then, turned swiftly pointing with two fingers at the cabins below the clearing.

“All right then. Sign up at office before bedding down or leave before dark. Right down there or head out.”

His hard padding broke the train of thought. The interjection left us looking at a row of pines and some hawks above. Nothing more.

“This is never going to change. We’ll get this idea to do something, come up here, and nothing will change.”

“The past never does,” Tom said. “What are we here for anyhow? And what was that by the pines?”

No one replied. We didn’t know exactly. It was a bit like a holiday. It happened every year. The expectation was great but over too soon. Maybe we wanted our youth back. After all, Vikki represented our youth. She was still something we could pin the blame on, or color so splendidly that we forgot everything but how beguiling she was, how marvelous our youth. We all had families, businesses, some were about to retire but Vikki pulled us together as an ensemble. Past our persevering friendship, past the ordinary, into desire. She rolled out occasionally to ignite the fire we lost. She rolled out to remind us that a face from a blue collar background burned in our memory, even after marriages, births and deaths. She rolled out because in the end justice was never had, we never could pin her down, and we longed for whatever she inspired in us that would not let her go, whether out of love or accusation. She was out of our hands. We could no longer touch her. Losing that thrill welded the thought, no matter how misrepresented, that Vikki was here, and she was as unattainable as ever.

Posted by combustiblealchemist at 5:27 PM