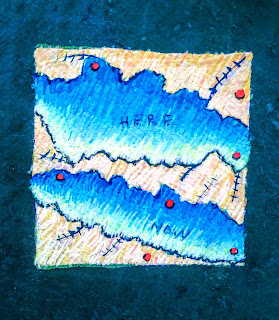 In the beginning, where did you go, that person you were – the flowing, loving child in the prim clothes? Quiet, intelligent, dreaming of great things to be done. The gentle child who with much confidence in the world sat in deep regard for all that was possible. She wondered at all the colors to be arranged and made to work. She stared out the window in the twilight hours when no one was there, looking at snow as it circled and dipped and danced. She wrote stories and drew pictures and was happy. Where did she go, that creature of all possibilities?

Storms hovered betting on landfall. Sharp harpies lurked behind thin walls. There was some moment when grey tentacles of slander and restriction grabbed her arms and held her down, forcing grim ideas about selfhood. Voices blared nightly in the arena of degradation. The howling of family harsh, as torrential tides rained with thick pelts. The bruising was unbearable. The betrayal daunting. She let them snuff her out. She closed the curtains and hid in the body of another for decades. The other with anger so vast it wiped the slate clean. It made her into the amalgamation of all that was wrong. The suffering made her heartless, so she wasted all that was good about her person until very little could be done to retrieve a life.

What exactly happened, and why, can never be surmised but know this. With barely a heartbeat left, and with a broken compass, she sailed through every harrowing bastion of disgust and bad tidings to re-emerge on the shore of nothing. Far, far, far away from the sores of youth. Not completely away from the sins of men and women but distant enough to find a plain of comfort. She had no idea she would survive it all – the violence, the indifference, the cruelty, the judgments, the humiliations. She did though and when the others, long since dead were but vague ghosts, a little joy returned. She forgot happiness thinking the sky was always falling. Within the confines of such things she created beauty. How is this possible? She will never know but a piece of that child exists somewhere, the spirit almost intact. It is the child that triumphed, not those who think they know and beckon toward hell. It is the elementary person after being ripped from herself remained available to rebuild a life.

Here she stands near the end. Resurrected at last. Gambling on safety. Hoping for an even chance. Startled, afraid and often encouraged. After a war, after a baptism, after the worst of the worst took her tongue she stood up with fair warning and something to say. In the early morning silence, she can hear her heartbeat and trust in the approaching day after a lifetime of falling off every corner. In the cursory hours when nothing means anything, all can be endured and made to appear miraculous. Here is rebirth.

Posted by combustiblealchemist at 2:41 PM No comments:


You began this morning so long ago. The milky sky thick with hot and cold fronts crossing. The dust storm exciting. Unknown regions of verisimilitude glowing like a brilliant mirage. You came to the end of the earth to answer questions, to explore the beginning of civilization–to understand why you, why the relentlessness monotony of misery. You found in the hidden cases of monstrous behavior this was not so uncommon. You were not so unique. Your private and public pain lower on the totem pole of extinguished lives than you imagined. The trafficked, the refugee, the imprisoned shrivel ahead of you in the line to orchestrated destruction.

You waited so long for this morning when you could feel as if the world became gentle. You could give up the ghost stalking your memory banks. The world stopped sucking the life out of you with unnecessary cruelty. You watch grinding poverty handled with care, the hollow eyes betraying its reality. You need to see this. You want to see this. There is purpose in the path most avoid. You can consider the uses of adversity. It puts power into your work, every brush stroke or word infused with the stark beauty of betrayal. The volume of assistance makes for a buoyant head rest, your survival depending on personal strength and the generosity of others. Strangers and near strangers along with friends and family, and now the American government, keeping you afloat.

This exotic location made its mark. Exiled without knowing what would happen next. The effervescence exists beneath the surface. The obedient child, the curious, well-behaved child expecting great things not completely extinguished, hiding, waiting for the moment to return, to come out from under the house you never had, to let go of the reigns of other’s opinions. To leave the past behind with the indelible mark of opinions of those who never bothered to know you, who never bothered to care. You walk from the fire like some embroiled goddess, fierce from the decades of abuse, molten brass in your blood, ready to storm the next chapter. Look for wings and you will find them. Forget about time and the millennium will appear. Stand tall in your oppression and the want of love will disappear. This is what you came for. This is what you want. To be yourself and make it work. For in the end, who is the originator of being? The universe is vast compared to sniveling idiots lurking in base corners, their own world microscopic. Who are the vampiric haters of the glorious day? They leave nothing behind but scarred flesh.

The day will come when freedom rings from sea to shining sea if you last long enough. Outliving the monsters brings you to  a fairyland of the mind where all will be well. The strength of your existence separates from the harrows of destiny. The morning full of tea and rotis lifts the spirit. It connects with the morning of coffee and bacon in another land, in the beginning of time before fate and humans tried to take you down. This morning has pinks and blues dancing in the ever present. The ever present is always with us. It is always the voice of possibility standing next to destruction.

Posted by combustiblealchemist at 7:38 AM 2 comments: