With current events weaving through your stomach like rotting barbed wire, all you can do is wonder. This unbearable cruelty is part of history from the beginning of time. You think the world has progressed but at the baseline, it has not. It is not medieval barbarity. It is instantaneous savagery with one quick death move. The killer was bred for this, was allowed this, did this, and the city burned. White slime slithered in from other places in unmarked cars with weapons and a plan in mind. Take advantage of black grief and anger. Stoke the flames of injustice for your own purpose. America is about to be leveled in one way or another as you sit complacently at your desk, in your yard brooding over the quarantine, in front of some distraction. Some have already dispensed with Covid regulations. It’s summer. Thou shalt not be prevented from having fun. The world turns without anyone noticing. Hearts melt, hearts harden, hearts wither away. Most pay little attention.

You look at your parents wedding picture. They look lovely. Your mother is a stylist. Perfect in white satin and lace. A pert smile. Makeup, hair done like a movie star. Dreams rattle in her head. She wants to be a fashion designer. Freedom from the family will not be had. Desires will not pan out. In the end, after your father died, her children alienated, her favorite niece thrown quickly in the grave from Sepsis, all was gone for her. She tumbled done the well at breakneck speed. You never understood her. She seemed remote and vicious. Now, as you look at her face in the wedding photo, you grieve for communication that was thin as dripping ice in November. You did not try after a certain point, intent at following your own star. Weddings never interested you. Meaning always did although in your own family none was had. Your father, similar emotionally, targeted you since no one else could see his dilemma. At his coffin you placed a Roseate Spoonbill feather, bright pink, for the photos you never sent him of your work in Louisiana. You did not want to leave him. Your mother’s death did not matter much but it ripped your heart like a buzz saw anyway. It was over. It was not done, though. She haunts you to this day.

You grew up in Newark during the race riots. It was a pivotal time of pain deep since you went to a diverse school. They were your friends. Your cohorts in growing up in a vicious city. The split from your family as a mere 10-year-old, was final. Their racist beliefs shattered your confidence. It split you in two. Dead presidents. Dead profits. Violence everywhere you looked. You tried to forget although some torments never go away. You seemed welded to violence, buried in darkness. Repeat occurrences. With one final push you broke free of the embedded chains that held you under water for a decade. It took too long to put things right. Here you are. Back at the beginning. Confidence shattered. The shining sun somewhat pointless. All you can do is find solitude. Make art, survive financially after losing everything, push on with the boldness to do the impossible and be grateful for life, the possibilities at your feet, the ability to feel for another as he cried for his mother. What can be done, you do not know? Be kind. Try to love even though you find you are lacking in that way. Move on in the moment to feel that despite the horror, the world turns and every day begins again.
Posted by combustiblealchemist at 8:05 PM 1 comment: 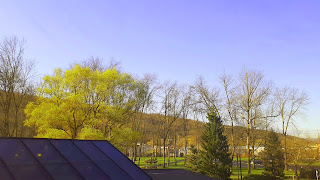 Time passes quickly, sometimes slowly from the mist of our current condition. It is hard to put a finger on. Difficult to fully comprehend. Everything changed like the Pink Moon in April. Familiar, huge, close, slow moving and at the same time far away. You did not understand until Horace almost died, then came back to tell part of the tale. A mysterious sickness like pneumonia mixed with malaria. Invisible. Threatening. In Manhattan, they hid the Auschwitz-like piles of body bags stacked into refrigerator trucks from forming long lines by stationing them throughout the city so not to create more panic. No one can say for sure what it is but some history of how it lurks, points to China, and now Europe. Our wayward president provoked, in his misguided talks, attacks on Chinese people. Always looking for someone to abuse. It is not one to blame but everyone. As always.

People in bandannas look like train robbers. Surgical masks and rubber gloves liter the streets here and there. The pandemic reality is as nimble as that. Trash indicating a lack of seriousness. You, and other travelers, cannot escape. No planes, trains or buses to move the body into thinking life may be different elsewhere. It is not. Enduring seems suffocating. Friends turn their backs and others become important. You look to comedy with a purpose. Laughing releases anger, fear and hopelessness. Who is doing good? The search soothes the soul. You pledge to connect. The silky sun on spring leaves hide the fact that in many places Covid 19 victims suffer alone, forgotten, in a wretched state of life and death. There is much to contemplate. You move inch by inch through your own challenges looking for a remedy. You know you are not alone since the hotline is unreachable lately as the date of resurrection is pushed forward; freedom denied until a later date. Many feel they cannot last much longer in their circumstance.

You feel numb, dumb struck, encased in red Jello. You have much to be grateful for. The constant aggravation makes you lose your spot in the line of sanity. Who can fix any of this? You watch those with larger issues, virus or not, do remarkable good for their community. Lives saved, hope given, by simple gestures of hardworking people with nothing to lose, with everything to lose. The truth of it changes attitude. You stack up your own needs with what you have. Once again, you landed on your feet amidst the terrors. A tale of two cities life. You have some freedoms, these abilities, the determination and resilience to continue. You tell the black dog to go outside and have fun among the freshly cut grass. You do what you must to put things right, trying to understand the point of it all. Somewhere in the world someone is starving, being bombed, trafficked, flayed by monsters. Such thoughts help you rearrange your disposition so you can go on and be of some use.
Posted by combustiblealchemist at 8:06 PM 1 comment: